There’s an untold story that demands to be understood. It has the potential to transform how people working in the social change space, particularly professionals of color, see possibility — for themselves, for others, for the greater good. Today in Southeast Michigan, four Black women are leading nonprofit and social change systems. And they are leading in a way that transcends individual glory and power; instead, there’s a cooperative, reciprocal model at play here.

In Part 1 of our series highlighting Black women leaders in Southeast Michigan, we sat with Yodit Mesfin-Johnson, Chief Executive Officer of Nonprofit Enterprise at Work (NEW), and Donna Murray-Brown, President & CEO of Michigan Nonprofit Association (MNA) to hear about their leadership journeys, the leadership gap, and the transformative potential of leadership which represents the communities we serve.

Was it always clear to you that this type of role existed and was right for you?

DMB: No. A career in the social sector was not always apparent to me.  I can’t remember ever having a person from the social sector visit any classroom I was in during my K-12 experience. Although I volunteered at community organizations, it never occurred to me to make it my life’s work. Moreover, my role model growing up was one of my aunts. She worked at a bank, so I was determined to do the same. I had a 20+ year career in banking — it was an amazing career that taught me so much about finance, business strategy, and community development. It was during my banking career that I became very interested in the inner workings of organizations that served vulnerable communities, so I started serving on boards and fell in love with mission-based work.

Then, a role at Michigan Nonprofit Association (MNA) became available. It was pure serendipity that I was recommended for an interview by the executive search firm hired by MNA to fill its Metro Detroit Partnership Director role. During the interview I felt energized and confident that it was a very special opportunity that would ultimately have me leave my long banking career to immerse myself in serving the organizations that serve communities.

Four years after joining MNA, I ascended into the position of president and CEO. It is absolutely the most rewarding role I have ever held. It is also a source of pride to be the first woman and woman of color to lead MNA in its 30 year history. Note: MNA was initially called Michigan Nonprofit Forum. At that time, a woman led the organization. Later it was reorganized and changed its name and became MNA. I am the first woman to lead MNA. YMJ: I’ve been fortunate to see a number of women in executive roles in the nonprofit sector throughout my career. This is an industry that attracts women, which I suspect has to do with our heart to serve. Additionally, like a lot of Black women, I’ve always owned small enterprises (or had a side hustle) throughout my career, so leading wasn’t new to me. But leading a nonprofit was new, and not something I took lightly. Specific to NEW, it wasn’t until recently that I knew the role of CEO was “right” for me. That revelation came through prayer, and after being mentored by other leaders I admire and trust, including my predecessor, and earning the trust and confidence of our team members.

How do you advise Black women (and other underrepresented people) looking to advance into leadership roles?

YMJ: There are systemic issues that contribute to the racial leadership gap, so, if I’m advising people it starts with acknowledging that. These days I find that I’m being asked where our leaders are — so I spend more time trying to connect BIPOC to opportunities then I do advising them. And, to attend to the gap we launched two programs: Champions for Change, that offers a Fellowship for BIPOC leaders, and a companion Allies Academy for white folx who are interested in building racial equity in their organizations. We think that creating space for  leaders of both groups to address the harm and impact of racism on leadership is important. Especially before we invite leaders into our organizations; we need to make sure they are being recruited into anti-racist, inclusive organizations.

DMB: I advise women of color and other underrepresented people to participate in as many opportunities to learn, engage, and be seen by a diverse group of people. Opportunities such as mentoring programs, fellowships, and trainings can build your knowledge and network. Take on speaking engagements to share your knowledge and further expand your network. Volunteer with meaningful and impactful initiatives to learn, use your skills and talents, and to further build your network.

Select a few people in your carefully created network to become your personal advisors. The personal group of advisors should be a diverse group of people that can be trusted, have your best interest in mind, and can serve as a sponsor to help you advance your goals. These individuals can be your advocates in rooms and tables that you may not have direct access to.

How do you think the nonprofit leadership gap has affected the impact of the work organizations in our communities pursue?

YMJ: I believe that people of color bring a set of lived experiences to our leadership that can be valuable as we consider the missions, programs and outcomes in our organizations and the communities we serve. Specific to human and social service agencies, we know that there are disproportionate numbers of BIPOC who are experiencing compounding inequities. Therefore, there is value in having the organizations that serve them, reflect their identities in the leadership ranks.

That said, having those positions filled by us does not   necessarily equate to changes in outcomes. Systems of white supremacy and dominant culture are insidious and we are not immune to them. So it is important that organizations, including leaders at the board and executive level, are applying racial equity practices within our work, and measuring the material change in outcomes regularly. It is imperative that we not just service poverty, but strive to eradicate it. Doing so requires us to acknowledge racism and other forms of oppression and actively dismantle them. All of us, not just white folx. Attending to the racial leadership gap is just one step in that equation.

How do you think organizations led by women of color have been supported? 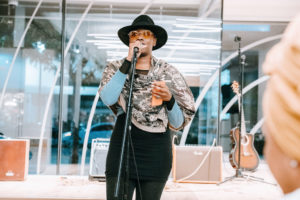 Generally speaking and supported by research, women leaders hold traits and have leadership styles aligned with transformative leadership. They are able to collaborate, energize and inspire their teams to do great work, and create and execute transformation. In thinking about the wicked issues that plague our communities, transformative leaders such as women are key. The notion of shifting demographics whereby racial minorities will soon be the majority, underscores leaders of color are and will continue to be more proximate to communities — therefore, WOC are uniquely qualified. Unfortunately, women of color leaders have not been supported as they should.

There are a multitude of informal supports for WOC that have been integral to mental and emotional well-being. Typically, they create opportunities for networking, a safe place to share challenges and discontent, as well as a place for peer learning. The informal supports are critical, yet are not enough to transform systems on their own. For instance, the homogeneity of groups creates a challenge when the issues are related to power structures and other systemic barriers which require more formal supports to mitigate adverse impacts.

Do you see the leadership gap closing? Are things “getting better”?

DMB: I think there are some glimmers of hope that things are getting better in some areas; yet a comprehensive approach to supporting WOC leaders is needed to have things to get better in a strategic and sustainable way. The strength WOC have gained through informal networks has been invaluable.  The networks have created  bonds that are demonstrated through peer advocacy, mentorship and in some cases sponsorship.

YMJ:  All of the national data says, no, the gap isn’t closing and things are not getting better. With fewer than 10% of nonprofits led by persons of color, and similar homogeneity on boards, there will need to be significant efforts to build a bench of up-and-coming leaders to make meaningful strides. The trouble is that with compounding student loan debt and the wealth gap, our sector is becoming less appealing to new folx entering the workforce. Not only that, the way we define leadership is changing. I’m seeing coalitions and grassroots groups collapsing traditional hierarchical leadership models and adopting new, collaborative models, where there isn’t one leader, but many. I find this intriguing and appealing. It’s also very feminist and womanist, which is exciting!

What do you think it will take to see more nonprofit leaders representative of the communities they serve?

YMJ: It’s due time that we reimagine and remake what we need instead of assuming that operating in current systems is the only way forward. I think people of color have served, and will continue to serve, our communities, and it might be on us to reconsider what we mean when we say leader — and who we mean. I think a function of patriarchy is strong leader nostalgia and I think as we enter this new decade, we need to reconsider this. There is no one person who is going to save us. Nor will one program or one effort. We all have to lean in. I am inspired by so many less well known people who are doing amazing, impactful work under the radar. I want to shine a light on them, and not always focus on those of us in the highest ranks of leadership. I guess I’m asking myself who I need to share power with in order to achieve a community, region, nation and world where everyone, not just some, have an opportunity to thrive and flourish? Nonprofits alone cannot make this a reality.

I’ll never forget Linda Sarsour, one of the founders of the Women’s March, saying at a conference: “Get out the way and trust Black women.” I couldn’t agree more!

DMB: I think it will first take an acknowledgment of the value leaders of color bring to community.  A dedicated, long-term initiative is needed to support people of color leaders, and particularly WOC leaders. The ideal initiative would direct resources toward leaders of color for professional development, unrestricted operational funding, access to lead philanthropic organizations and their top leaders, and structured engagements with Centers of Influence with the intention of allowing WOC to create their own relationships with those to whom they would most likely not have access. Support and recognition of the informal networks because of the vital role they play in the well-being WOC leaders.  Essentially, it will take the commitment of the entire social sector ecosystem to create change toward support of leaders of color.